This article is for the viewers of HBO’s Game of Thrones. The uninitiated may not wholly understand the plot given below.

What if Robb Stark had kept his promise to the Freys?

The Red Wedding was perhaps the biggest heartbreak to all the Stark lovers (which translates to ‘all the viewers’) of GoT. Winter certainly began to loom closer since the cold blooded murder of the King of the North at the infamous Red Wedding.

Walder Frey, (the old man with uncountable successors waiting for his death) claims the reason for the treason as the break of promise made by Catelyn Stark. She’d promised the marriage of the King of the North to one of his own Frey daughters. We know that Robb Stark breaks this marriage pact by marrying sweet Talisa, a noblewoman from the city of Volantis he meets after the war of five kings.

So, what if Robb Stark had married a Frey instead? At first glance, this promises to secure a good future for the Starks. They’d have gained army and control of the Frey bridges, cemented their position in the north and a crossing to the south. With the Freys in a marriage alliance, it could have been a repeat of the power Baratheons gained out of the Robert-Cersei knot, or more recently, the Baratheon-Tyrell knot (Jeoffrey is a Baratheon until proven otherwise). Before you start to hate Talisa for her charisma and tiny waistline and whatever else Robb fell for (what exactly did he fall for anyway?), let’s talk about the other major character who benefited out of the Red Wedding. 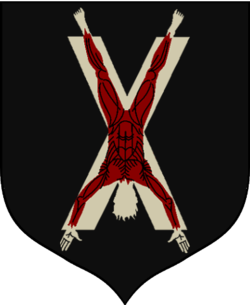 Banner of the flayed men: The Boltons.

Roose Bolton’s, “The Lannisters send their regards”, and that cold blooded stab into Robb Stark’s heart is perhaps one of the most iconic scenes ever portrayed on the Game of Thrones, one that once again, changed the course of the show, and depicted how little care GRRM has for the hearts of his viewers. Would Roose Bolton really have cared if Stark and Freys had their alliance strong?

The answer is a resounding no. After the escape of Jaime Lannister with the help of Catelyn Stark, the betrayal of Theon Greyjoy, the sacking of Winterfell and later the hanging of Lord Rickard Karstark*, men of the north had started to have doubts about their young King’s capabilities. Roose Bolton entered a pact with Tywin Lannister to turn against the young wolf in return for the entire northern kingdom. His personal gains out of his alliance with the lions greatly outnumbered his advantages of staying with the wolves, and he took the move best for him, destroying all of the Starks, their armies, their King, their Regent Queen, Queen and the young unnamed prince/princess.

So whether or not Stark had wedded the Freys, their end was imminent. Atleast Robb got to meet love before he was butchered.

*The house of Karstark is an ancient family of the north and one of the strongest allies to the Starks. Lord Rickard Karstark was executed on the orders of Robb Stark, for the murder of two young Lannister captives.

FUQ: Why are some doors made of glass?